About taxation in UK

The British economy is stable, its legal system is predictable, it offers high standards of education and a lot of social benefits to its nationals. That is why many foreigners choose to come and settle here. Besides, Great Britain offers benefits and incentives for its tax residents which is good for business owners or property buyers. When it comes to residency for taxation purposes, many people do not even know when and how they become tax residents, how to optimise taxes and benefit from the system.

In any country, including the UK, taxation of individuals starts with establishing their status, and every country has its own regulations and criteria for that. Up until 2013, it had been hard to establish your tax status in the country. New rules were introduced to make it easier for everyone.

First thing that anyone who has just arrived in the UK or who has been living here already must do is to determine their tax residence status. In 2013, the HM Revenue & Customs introduced a special Statutory Residence Test (SRT) which consists of three major parts and a series of simple questions. By answering these questions  you will be able to understand whether you have been UK tax resident in any tax year running from 6 April to 5 April . 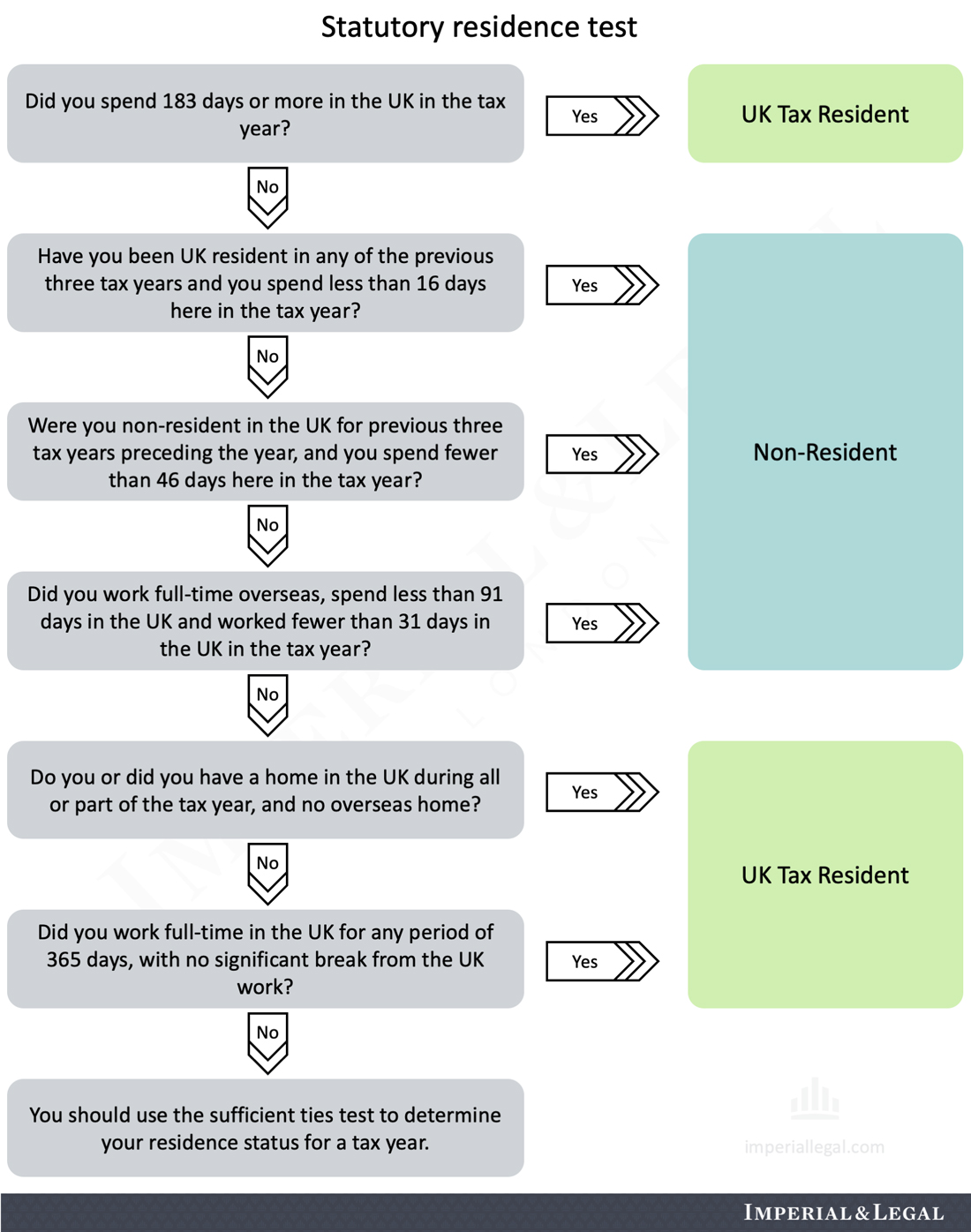 If you cannot answer “YES” to any of the questions from the first two parts of the SRT test you should use the sufficient ties test to determine your residence status for a tax year.

You will need to consider your connections to the UK, called ties, and determine whether your ties, taken together with the number of days you spend in the country, are sufficient for you to be considered UK resident for taxation purposes for a particular tax year.

There are 5 ties that you need to consider:

Family tie – a family member resident in the UK (spouse, civil partner, cohabitee or children below 18 years of age).

Accommodation tie – any accommodation available in the country for 91 or more consecutive days in the tax year with a minimum of one night spent there.

Work tie – worked for 40 days or more in the tax year in the UK with a minimum of 3 hours per day.

90 days tie – was in the country for more than 90 days in one of the previous two tax years.

Country tie – spent in the UK more nights than in any other country in the world.

The number of days you spend in the United Kingdom in a tax year dictates the number of country ties that are needed for you to be a resident there. 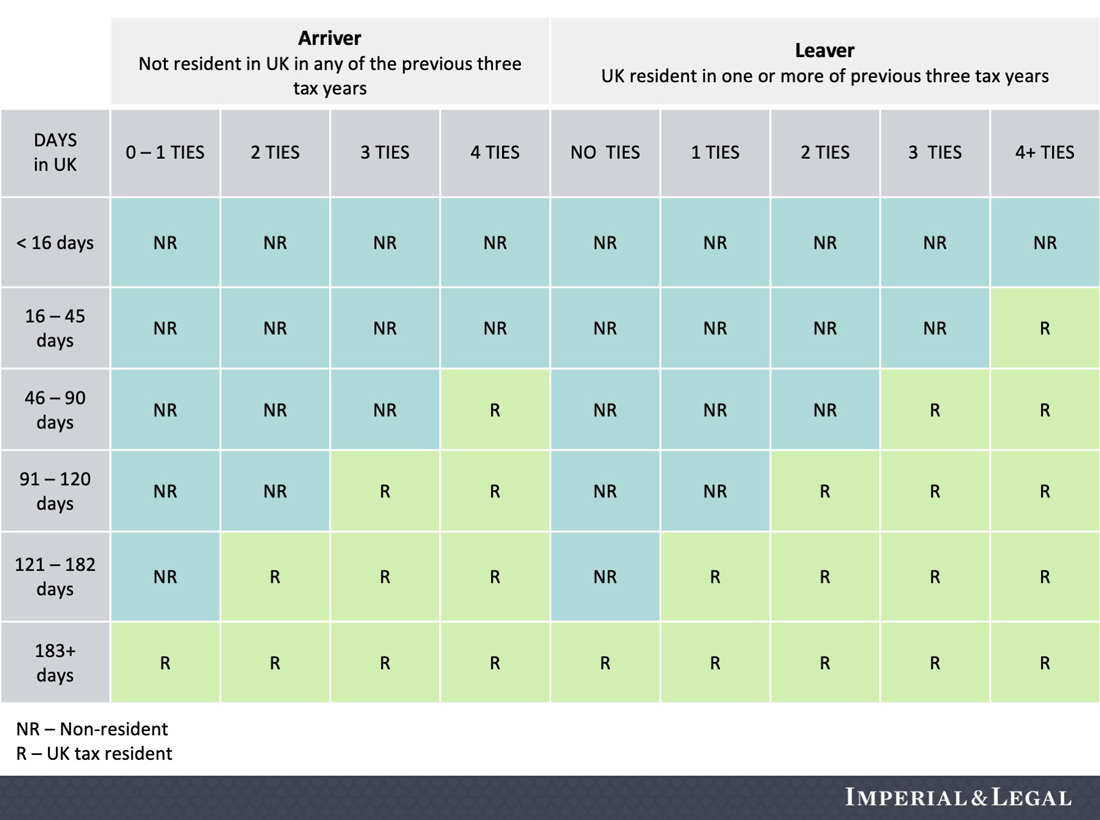 If based on the test results you are classed as a resident for taxation purposes the same rules apply to you like to any other UK tax resident. You are tax resident for the whole year from 6 April till 5 April and you must declare all your income received during that period and you must declare and pay taxes on all your worldwide income irrespective of the country and source of its origin by submitting a Self-assessment tax return.

However, there might be exceptions to these rules based on personal circumstances. For example, when moving to the UK to settle you will most probably become resident for taxation purposes from the arrival date instead of the tax year start date. Besides, all non-domiciles, i.e. those who were not born in the United Kingdom, can choose to be taxed on the remittance basis and only be taxed on income earned in or brought to the country.

Domicile is a complex concept of UK general law and is based at least partially on case law. In most cases it belongs to the country of your and your father’s birth. You can retain the domicile of the country of your origin even after you become UK resident. Your domicile of origin will remain the same unless you make the change by requesting to obtain a domicile of your choice. This is complicated matter and will require you to cut all ties with country that was your original domicile.

In general, those who are resident and domiciled in the UK will pay tax here on their worldwide income and gains as they arise.

How you are taxed in the UK is one of the factors that relate to your domicile. If your domicile belongs to any other country but this country, you are known as non-domicile or non-dom. If you are a tax resident in the UK non-dom status gives you some benefits, like an opportunity to use remittance basis and pay your taxes only on income and gains received in the country or remitted here.

As of April 6 2017, the new legislation came in force and now you will be given a deemed domicile for all tax purposes if you have been UK resident for 15 out of last 20 years. You will not be able to benefit from the remittance basis as of year 16 (resident for 15 out of the previous 20 tax years) of your residence for taxation purposes. Instead, you will be subject to the UK tax on all worldwide income and gains on an arising basis. You will also be liable to local inheritance tax on your worldwide assets, which is currently at 40% with free allowance for £325,000.

The remittance basis is available if you are a tax resident but not domiciled in the UK. Meaning that you will be taxed only on foreign income and gains which are brought into or used in (remitted to) the country and received here. The income which arises abroad and remains abroad will not suffer taxation in the UK under the remittance basis.

It is necessary to claim the remittance basis each year; however, you may choose to claim under arising basis instead from year to year. You don’t pay UK tax on your foreign income or gains if they are less than £2,000 in the tax year or you don’t bring them into the country.

How to claim remittance basis

To claim the remittance basis, you would need to submit a self-assessment tax return by the 31st January following each tax year. Once you make this claim you will lose your personal allowance which allows some of your income not to be taxed, currently it is set at first £12,570 of your income each year. You will also need to take into consideration of how many tax years you have been resident in the UK, as that will determine an annual Remittance basis charge (RBC) payable per year:

The actual payment of the charge must be handled accurately so that it does not itself constitute a remittance. The remittance basis is a complex but very important relief. Due to complexity of the rules, it is not always easy to determine whether the remittance basis will be worth claiming.

Furthermore, if you are a resident in the UK for taxation purposes, you are liable to tax on all your worldwide income unless you are non-domicile. In this case you use special tax regime called Remittance basis. When you worked out that you are a tax resident in the UK in a year under a question you should consider the level of your income worldwide and if this level is above £2,500 per year and it is not an employment with a British company you are obliged to prepare and submit your Self-Assessment Tax Return (SA TR).

Tax year in the UK starts on 6 April and finishes on 5 April. So, you have time until 31 January the next year after the questioned to prepare and submit your tax return. Please pay attention, that even if you were or were not considered a non-UK resident before the SRT was introduced in 2013, your status may have changed since its introduction.

There are many things you need to be aware of when establishing your residence status in England for taxation purposes. Proper tax planning needs to include all aspects of your moving to the UK to avoid any surprises and big amounts of taxes.

Our advisers at Imperial & Legal offer a whole range of services, customised solutions for everyone and individual approach. They are highly qualified to support you on every stage of cooperation and consult on immigration and taxation liabilities.

We have been helping individuals from around the world with their tax liabilities. Contact us to book an individual tax consultation.

If you are a UK tax resident, you need to fill in and submit your tax return.
Tax solutions

We offer help to individuals and businesses with their tax matters – experts in tax planning and optimisation.
Corporate services